Swingers Club: A Survey of the Tennis Courts in Osaka, Japan

Where to Play Tennis in Osaka
by Oliver; 2015

This was originally published in Kansai Scene Magazine in 2008. They took it down long ago but here it is for the tiny demographic of English-speaking tennis players in Osaka. I assume the price and phone information is no longer accurate.

A Match at Utsubo Park
It was the sporting equivalent of realizing your stash is gone, and spending the rest of the night huffing two-hundred yen toilet bowl cleaners. A Tuesday evening, 6:30pm. Suddenly, the urge to play tennis hit me so hard I was forced to do the only thing I know that can provide an addict relief: search for something that could serve as a backboard to hit the ball against among the warren of alleyways behind my house in Abeno Ward. I considered: the side of a building? No, private property. The embankment next to a cemetery? Bad karma. I found a place, at last, as dusk fell—a tall concrete wall surrounding a girls’ high school on a back road with just enough width to get some momentum going. As I began hitting carefully controlled backhands and forehands, I examined my surroundings. A ball pitched too high would sail over coils of barbed wire into no man’s land. A low ball might fall into a sloped drainage channel and be carried into the city’s sewage system. A fast ball might get behind me and bounce, in Q*bert fashion, down a long staircase into the darkness below. After an hour of fun, I inevitably lost my ball and began rooting around on the edge of someone’s yard searching for it. At that moment a dog erupted into a fit of violent of barking, and the last part of my workout was a sprint home.

But, tennis players of Osaka, it needn’t come to this! Although contending with potholes, guardrails, and dogs can be good practice now and then, canvassing the city will reveal a vibrant tennis scene that has an answer to every level of addiction and solvency. Osaka is a city blessed with many parks, and a decent proportion of those have tennis courts. The best way to go about finding a place to play is to visit all the parks in your area and see what kind of deals they offer. I recently made a South to North trek through the city visiting some of the major parks, and talking to people involved in tennis. I went undercover as a foreigner with Japanese so egregious it made the most gut-wrenching caterwaul sound like Paul McCartney by comparison. 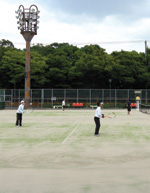 This sprawling sports park two stops south of Tennoji on the Midosuji subway line boasts a quiet array of courts with a wall of trees that blocks it off from the main road. The staff is very friendly and they speak some English. If need be, they also have the ability to embellish their Japanese with enough pantomime that even a moron can comprehend the meaning. The courts are rightly popular, so make your reservation early.

But what about the down-and-out among us who snubbed the Buddhas at the last temple we visited? Fortunately, Nagai Park also offers a tennis backboard of sorts. Just inside the West Entrance stands a smooth, two-slab concrete monument off of which locals often hit the ball. The North side is preferable, for the South side is fringed by a small moat (you can sometimes see players bending comically far over the water to retrieve a ball). Free entertainment when you sit down for a rest: skateboarders, breakdancers, and occasionally beatboxers also share this area of the park.

Number of Courts: 8
Type: Artificial turf dusted with sand
Court Rental Price: ¥900/hr before 6pm, ¥3,600/hr after
Reservation Phone Number: 06-6690-2780
Racquet Rental Price: ¥500
Tennis Backboard: No
Lessons: Mizuno Tennis School offers a 2 month 8 lesson package to players of beginning through intermediate ability for ¥14,000. Each lesson lasts 1 hr and 45 min. You can sign up at 06-6698-1235.
Other: Mysterious concrete monument just inside the West Entrance is frequently used by locals as a backboard. Beware of the moat, though.
Getting there: Subway Midosuji line, Nagai stn. Take Exit 1 and walk north past the West Entrance to the park. After you pass the Nagai Sports Center, it's on your left. 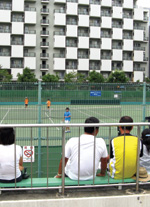 Located one stop to the west of Hommachi on the Chuo subway line, this is perhaps Osaka’s most impressive tennis complex. Home to a number of International Tennis Federation junior events, the park contains over 20 beautifully groomed courts, plus a couple of full scale tennis stadiums to top it off. For the casual player, however, the site’s popularity may come as a bit of a hindrance. The courts are usually packed with players or hosting various tournaments. It’s an excellent place to attend tennis school or spend an afternoon watching a match, but you can do better renting a court somewhere a little less well-known.

Number of Courts: 23 for public use
Type: 14 are hard court, 9 clay
Court Rental Price: ¥1,600/hr before 5pm, and ¥4,300/hr at night for the hard courts; ¥800/hr for clay
Phone Number: 06-6441-6211
Racquet Rental Price: ¥500
Tennis Backboard: No
Lessons: Utsubo Tennis School has an eight-lesson package to players of beginning through intermediate level for ¥13,000. Each lesson lasts an hour and a half, and typical classes have from two to 10 people.
Other: Players should make a pilgrimage to this Todai-ji of tennis complexes to marvel at the facilities.
Getting there: Subway Chuo line, Awaza stn. Take Exit 1 and walk due north to the park. 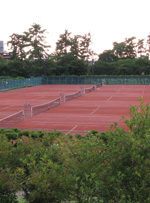 If you’re willing to hike deep into the park, these are among the most beautiful tennis courts in Osaka. They are, after all, set in a park that’s famous the city over for the beauty of its trees and gardens. One comes to the tennis courts after a walk past flower beds and ponds containing lotuses and turtles. Forming a barrier around the courts, Japanese cloud-pruned bushes throw up a wind block and remind you that you're in the Far East. You can’t attend tennis school here, or rent racquets or shoes, but the rates are cheap and the scenery makes up for it. There’s also a broad backboard in case you’ve worn out your tennis partner.

Number of Courts: 18
Type: 6 are hard court, 7 clay, and 5 dirt
Court Rental Price: ¥800/hr for clay and ¥1,000/hr for the others, but the price goes up a bit on the weekends.
Phone Number: 06-6862-4945
Racquet Rental: No
Tennis Backboard: Yes
Tennis School: Not Offered
Other: Topiary action - Japanese cloud-pruned bushes throw up a wind block around the courts while reminding you you're in the Far East.
Getting there: Subway Midosuji line, Ryokuchi-Koen stn. Take the exit to the park and a 15 minute hike directed by sign posts will lead you to the tennis courts.

Subway Sakaisuji line, Nagahoribashi stn. Dirt cheap lessons with a large crowd on an indoor court in the middle of the city. All ages and levels welcome. Excellent fun. Call 06-6211-2010. You can usually finagle a free trial lesson.

Subway Sakaisuji line, Ogimachi stn. There are no tennis courts in Ogimachi Park, but the park office has a wonderful staff who can make reservations for you at a number of central locations around the city for ¥800/hr. From the station walk west across the park to get to the office or call 06-6312-8121.
Advertising